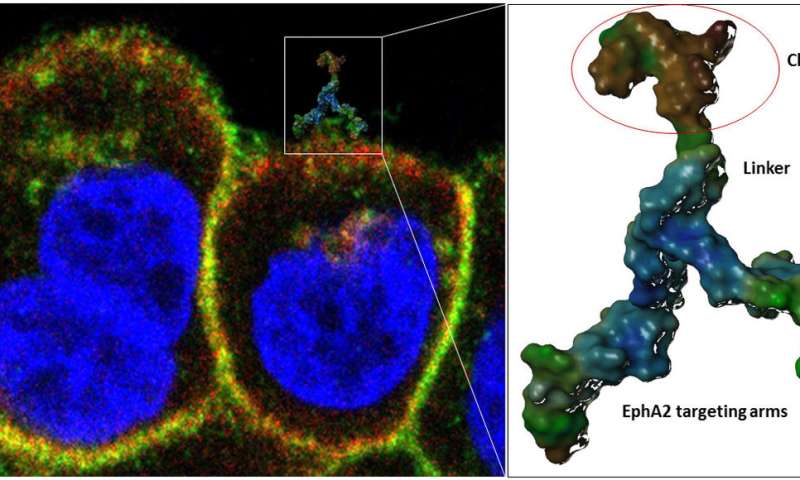 Schematic illustration of the developed cancer targeting agent -- 123B9 in this study. The compound (right panel) has a scorpion-like shape with two arms grabbing EphA2-expressing cancer cells, and a tail (brown) constituted by a cytotoxic chemotherapeutic agent (paclitaxel used in this work). The agent would recognize the surface of cancer cells rich in EphA2 (labeled in red in the left panel which shows cancer cells) and deliver the cytotoxic agent. Credit: Pellecchia lab, UC Riverside.

A research team at the University of California, Riverside has discovered a way for chemotherapy drug paclitaxel to target migrating, or circulating, cancer cells, which are responsible for the development of tumor metastases.

Until now, paclitaxel has only been used to target rapidly dividing cancer cells. The team was successful in getting the drug to piggyback on 123B9, an agent they devised to target an oncogene called EphA2 (ephrin type-A receptor 2). EphA2 spreads cancer by allowing malignant cells to migrate from the primary tumor into circulation and eventually to adhere to other tissues.

"Once this novel tumor-homing agent binds to the EphA2 receptor, the oncogene functions as a cancer-specific molecular Trojan horse for paclitaxel, carrying the drug inside the cancel cell, killing the cell, and thwarting metastasis," said Maurizio Pellecchia, a professor of biomedical sciences at UCR's School of Medicine who led the research. "Without the targeting agent, paclitaxel cannot hitch a ride on EphA2."

Study results appear in the Journal of Medicinal Chemistry.

Tumor metastasis is a leading cause of patient morbidity and mortality, and no treatments are currently available that specifically target metastasis formation. Cancer cells depend on a number of oncogenes, like EphA2, to form metastasis, the medical term for cancer spreading from the primary site to other regions in the body, accomplished when cancer cells break away from the primary site, travel through the blood or lymph system, and form new tumors elsewhere in the body.

Pellecchia and his colleagues found that when 123B9 binds to the extracellular region of the EphA2 receptor expressed in cancer cells, it causes the oncogene to internalize and degrade inside the cell, thus preventing cancer cells from entering circulation and metastasizing.

"Because this binding causes EphA2 internalization, we also sought to conjugate 123B9 with paclitaxel and thus direct the drug to migrating cancer cells," said Pellecchia, who holds the Daniel Hays Chair in Cancer Research at UCR.

Recent collaborative work between UCR and Cedars-Sinai Medical Center in Los Angeles demonstrated that in animal models of human breast cancer, mice treated with 123B9 that was conjugated with paclitaxel had significantly fewer circulating cancer cells in the blood compared to mice that were not treated or even treated with paclitaxel alone.

"Our work predicts that reducing the number of circulating cancer cells produces less metastasis," Pellecchia said. "Indeed, in a second tumor model of metastatic breast cancer, we demonstrated that mice treated with the EphA2-targeting paclitaxel conjugate presented nearly no lung metastases, while a large numbers of lesions were observed in both untreated mice and in mice treated with just paclitaxel."

Pellecchia said the road to a therapeutic for human trials is still long and includes the iterative design and synthesis of more potent and selective agents.

"Nonetheless, the proof of concept studies we have obtained thus far are extremely encouraging, and we are confident that with proper support and efforts we could translate our findings into experimental therapeutics for a variety of solid tumors that are driven by EphA2 overexpression, including breast, lung, prostate, pancreatic, and ovarian cancers," said Pellecchia, who serves as the founding director of the Center for Molecular and Translational Medicine at UCR.

He noted that while these studies solidify UCR's partnership with Cedars-Sinai Medical Center, the research team moving forward is expanding. Already, it includes UCR's Jikui Song, an assistant professor of biochemistry, and Dr. Samar Nahas, an assistant clinical professor of gynecology and oncology in the School of Medicine.

Provided by: University of California - Riverside


The views expressed in content distributed by Newstex and its re-distributors (collectively, "Newstex Authoritative Content") are solely those of the respective author(s) and not necessarily the views of Newstex et al. It is provided as general information only on an "AS IS" basis, without warranties and conferring no rights, which should not be relied upon as professional advice. Newstex et al. make no claims, promises or guarantees regarding its accuracy or completeness, nor as to the quality of the opinions and commentary contained therein.