Olli Hautero, Senior Physician in Vascular Surgery at the Vaasa Central Hospital in Finland, is all smiles. He has just finished a hybrid surgery in the new hybrid operating room. Another project he has personally overseen at Vaasa Central Hospital is building a hybrid operating room at the hospital. The new room, which took three years to finalize, will bring many benefits and streamline overall patient care.

The hybrid operating room project was completed in early February 2021, when the Discovery IGS 7 OR AutoRight hybrid angiography system from GE Healthcare was installed in the operating room and put into clinical use during training. Hautero has a reason to smile: The long wait is over, the new hybrid operating room is up and running, and the opportunities for more varied and demanding procedures than would be possible with a mobile C-arm are now a reality.

According to Hautero, this brings great advantages in terms of what can be done for the patient in a single procedure session and has a direct impact on the overall treatment of the patient and its duration. 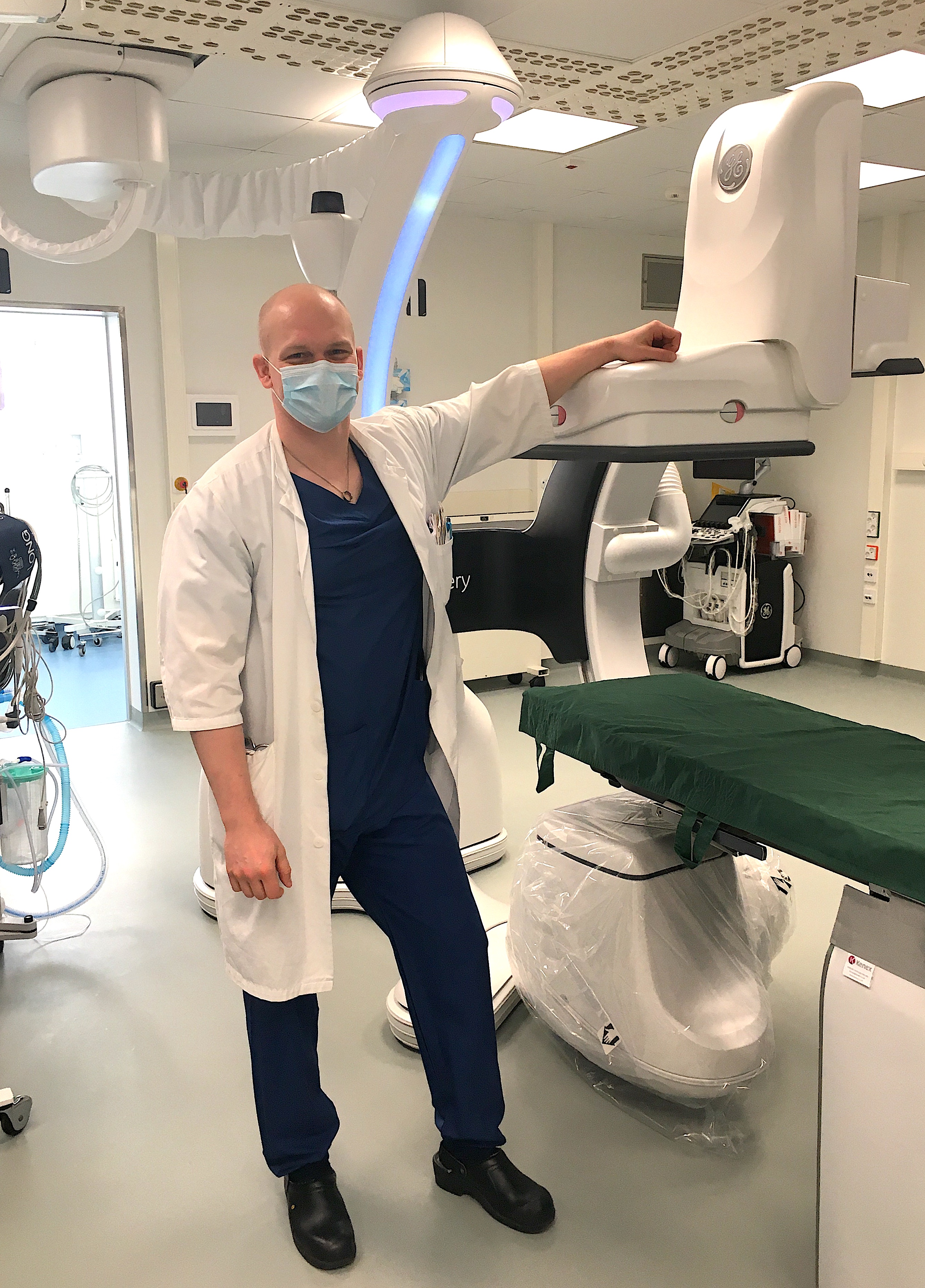 What is a hybrid operating room?

Olli Hautero has been leading the Vaasa hybrid operating room project since the beginning. A hybrid operating room is a space where high-quality X-ray imaging, open surgery, and anesthesia can be seamlessly combined. It is also possible to combine endoscopy and laparoscopy with the above.

In Vaasa, the transition to hybrid operation means that procedures no longer have to be staged to be performed partly on an X-ray angiography system in an X-ray department and partly in the operating room, with the patient having to be transferred the patient between the two procedure areas. Now both procedures can be performed in one room without having to move the patient. This requires staff working in the room to be skilled not only in patient care and surgery but also in radiation safety.

Dr. Hautero is visibly pleased with his team, which includes trained hybrid nurses who have been involved in the operating room from the start. The change in operations had been anticipated well in advance of the introduction of the hybrid room, which was a major leap in its implementation: the nurses and doctors who attended the training had a thorough knowledge of all the specialized areas required in a hybrid surgery. 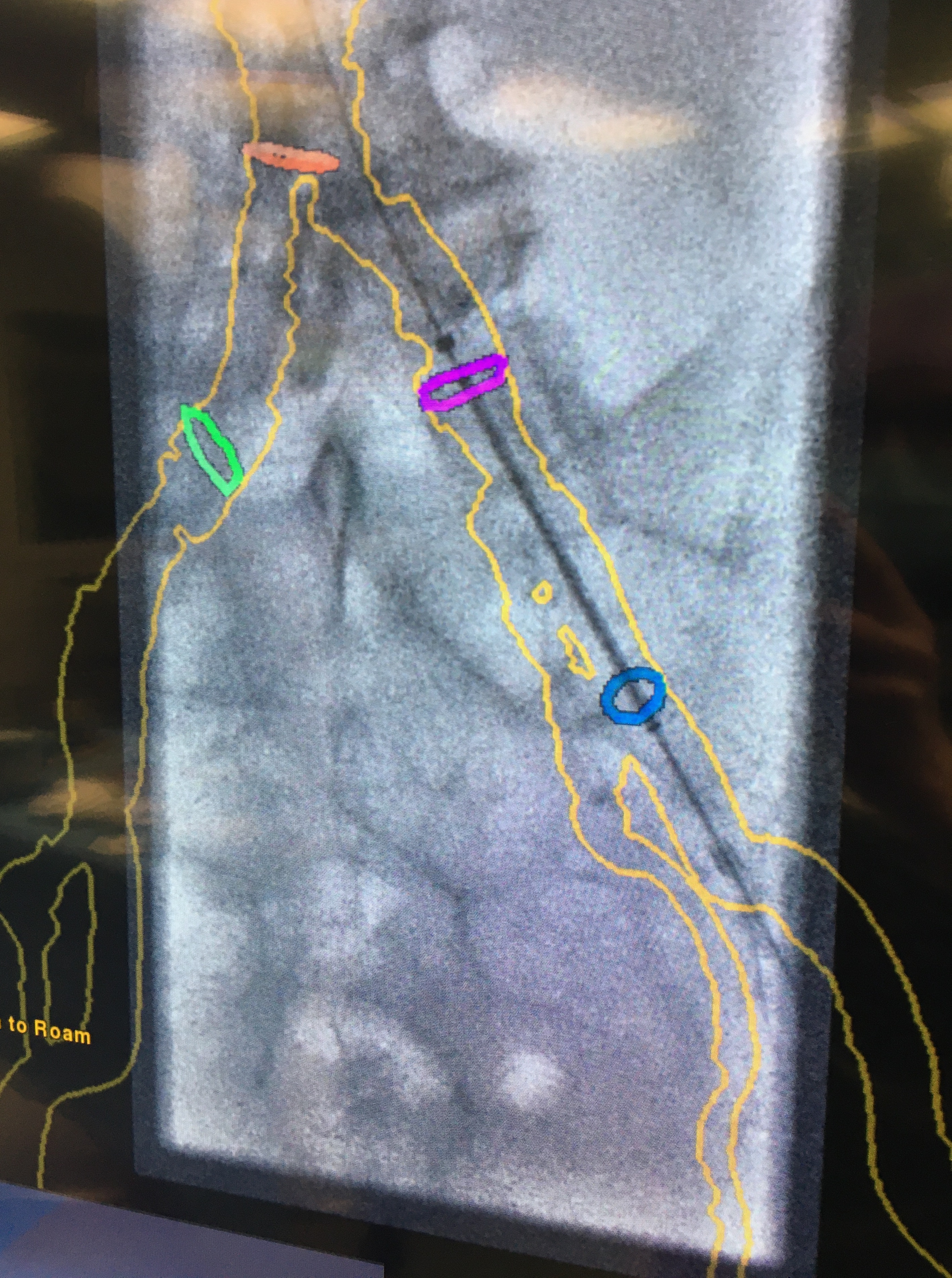 Jump into the world of fusion imaging

Since the introduction of the hybrid room, Hautero has also incorporated fusion imaging into his routine work in hybrid procedures. Fusion imaging means using pre-operative CT or MRI images to perform angiography.

Before the procedure, the surgeon prepares a 3D model using CT images, which can then be integrated into a fluoroscopic image of the angiogram, following a very simple workflow. In Hautero's experience, this not only speeds up the endovascular part of the hybrid procedure, but above all, saves radiation and significantly reduces the amount of contrast medium needed for the procedure.

Other features of the angiography system, such as subtracted fluoroscopy, have also brought both dose savings and speed to the different phases of the angioplasty procedure. According to Hautero, fusion imaging enables more demanding procedures, which were not possible to be carried out using a mobile C-arm.  The 3D models also allow to plan procedures further in advance than before.

The implementation and training of the hybrid room is a complex process. Activities and operations  need to be carefully planned. The best way to do this is to work as a team. Training in the Vaasa hybrid room was also carried out as a multidisciplinary team, with the entire hybrid team present. The training included not only training on the angiography system, but also other equipment in the hybrid room, from the use of the contrast media injector to the operation of the room lights.

A key part of the training was the simulation of the procedure, which has also become part of the routine at the Vaasa hybrid room. Each new procedure is simulated and the best workflow is worked out in advance together as a team. Olli Hautero also stresses the importance of training and guidance on the work of the hybrid service:

“There is much to learn for everyone in the hybrid room, not only about the imaging equipment. No one can come in from the cold into this room without substantial guidance.”

As an example, Dr. Hautero points to the hybrid room's ceiling pendulums and other fixed ceiling-mounted equipment that interface with the imaging equipment. These all need to be taken into account in the operational design to ensure a safe working environment. According to Hautero, this has brought several  new ways of operating and working, as workflows have had to be carefully considered to optimize operations. According to Hautero, learning and investing in innovation has been worth all the effort: after just two months, more demanding and challenging procedures than before can be performed thanks to the new procedures, the basic features of the full-scale angiography equipment and the technology of fusion imaging.

“This is reflected in the benefit to patients: we have been able to offer hybrid procedures that previously would have required much heavier open surgical treatment. This means shorter treatment duration, less post-operative discomfort and, ideally, much lower risk procedures with a direct positive impact on the patient's health and even life.”

Dr. Hautero sums up the benefits of the new hybrid operating room and the fusion imaging that has come with it in three aspects: savings in radiation dose, savings in the use of contrast medium, and the possibility to practice more demanding procedures. The surgeon will also benefit from the new approach: good fusion images help the surgeon work more efficiently and effectively.

“Building and introducing a  hybrid room  is a lengthly process, but one that will bear fruit in the end. It's great to work in a room like this!”