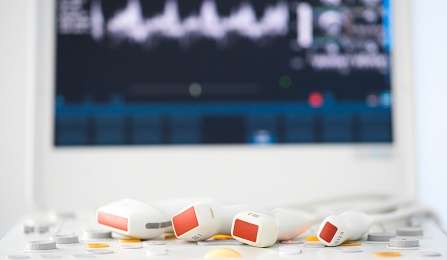 A simple echocardiogram conducted to evaluate the marker the UB researchers studied may also  help predict beforehand which patients will not benefit from undergoing TAVR. Credit: University at Buffalo

As more elderly patients undergo the minimally invasive heart valve procedure called Transcatheter Aortic Valve Implantation (TAVR), concerns have been raised as to what causes some to be readmitted for heart failure after the procedure.

Now, University at Buffalo researchers, working in the Gates Vascular Institute, Kaleida Health, have published a paper that identifies a new way to predict which patients may be at higher risk. The paper was published online on Aug. 21 in Structural Heart: The Journal of the Heart Team. First author is Aishwarya Bhardwaj, MD, a medical resident in the Department of Medicine in the Jacobs School of Medicine and Biomedical Sciences at UB. Tharmathai Ramanan, MD, clinical cardiovascular disease fellow at UB, is first co-author. Vijay S. Iyer, MD, PhD, associate professor in the UB Department of Medicine, is principal investigator. All see patients through UBMD Internal Medicine.

TAVR is a minimally invasive procedure reserved for patients who have been turned down for a traditional aortic valve replacement by open heart surgery due to serious medical co-morbidities.

"For many patients, TAVR is a life-saving and life-enhancing procedure and most see significant improvements in their symptoms," said Bhardwaj. "However, a small percentage may not benefit adequately with the procedure. Heart failure readmission is one of the most common cardiac-related readmissions within the first year after TAVR."

To find out what might be putting these patients at higher risk, Bhardwaj and her colleagues conducted a retrospective study on 198 patients (mean age was 82 years) who underwent TAVR from 2012-16 at the Gates Vascular Institute in Buffalo.

They focused on a measure called elevated valvuloarterial impedance, also known as Zva, which is obtained noninvasively by a cardiac ultrasound. Zva incorporates both the aortic valve stenosis and the resistance encountered by the heart due to thickening of the arteries and blood vessels for pumping blood in the body.

While Zva has been shown to have prognostic significance in TAVR patients, there was no quantifiable data as to how useful it might be in predicting heart failure, Bhardwaj explained.

"Our study was the first to evaluate the role of Zva, which can be easily obtained non-invasively for predicting heart failure readmissions," she said. "Identifying such prognostic markers would help reduce rehospitalizations and would eventually translate into reduced health care expenditures as well."

The UB study found that among 41 patients who were rehospitalized after TAVR, nearly twice as many patients (34.2 percent vs. 18.1 percent) with a high Zva prior to undergoing TAVR were readmitted to the hospital after TAVR because of heart failure symptoms.

Another key finding was that patients in whom the Zva either increased or remained unchanged were three times more likely (18.2 percent vs. 6.3 percent) to die within one year of the procedure.

"For that reason, we recommend that Zva should be integrated as part of routine follow up post-TAVR," Bhardwaj said, "and should be obtained serially during follow-up echocardiograms (ultrasounds of heart) for monitoring risk of heart failure readmissions."

Determining who may not be a candidate for TAVR

Bhardwaj and her co-authors note that Zva may also have relevance to determining who should and should not undergo TAVR in the first place.

The importance of such risk stratification has a significant impact, the authors said, as hospital administrations nationwide work to minimize heart failure readmissions while trying to identify patients at higher risk to utilize more resources in the outpatient setting.

"Zva can be utilized to identify patients at high risk for readmissions and accordingly, help divert resources to these patients by establishing transitional care programs and close cardiologist follow up in order to avoid readmissions in hospital," Bhardwaj concluded. "This should translate to potential cost-savings and reduced health care expenditures."

Provided by: University at Buffalo

The views expressed in content distributed by Newstex and its re-distributors (collectively, "Newstex Authoritative Content") are solely those of the respective author(s) and not necessarily the views of Newstex et al. It is provided as general information only on an "AS IS" basis, without warranties and conferring no rights, which should not be relied upon as professional advice. Newstex et al. make no claims, promises or guarantees regarding its accuracy or completeness, nor as to the quality of the opinions and commentary contained therein.